One of the smallest commercial wine producers in Istria Croatia is Pino Rossi, with a micro winery little bigger than a family home, in the tiny hamlet of Bajkini, which is at the top of the south side of the beautiful Mirna Valley – just outside the small town of Vižinada, about 17km inland from the historic costal tourist destination of Poreč. This is the heart of the famous Istrian wine country of Croatia, which is predominantly defined by the bright, rust red coloured terra rossa soil that gives the wines from the area a distinctive vibrancy and minerality. 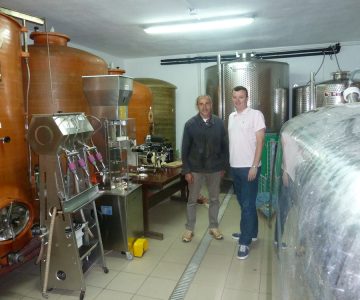 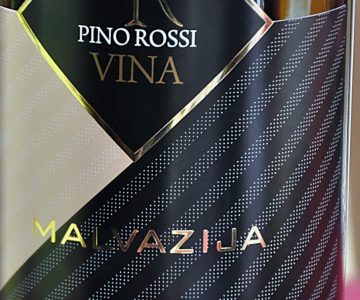 Pino Rossi Malvazija Istarska 2013 a beautiful example of the wine with low acidity. 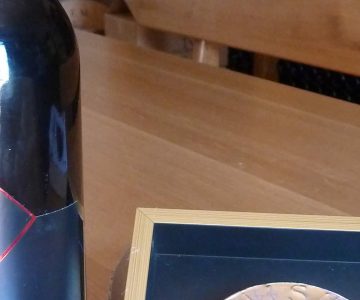 I first met Josip Rossi several years ago when staying at Villa Olivia, which is under a kilometre away from the Pino Rossi winery. Josip was passing the villa on the dirt track in his old red tractor to work in the vineyards nearby. Cindy, his long haired golden Labrador, named after the famous model Cindy Crawford, was following along leisurely behind him. Whenever he passed we would always exchange greetings and wave, I calling out to him “Jo” and he calling back to me “Jam-ass”, which my family found very amusing.

Josip (aka Pino), has just 4 hectares of vineyards which produce around 10 to 12 thousand bottles per year in total.  The vines are approximately equally split amongst the grape varieties of Malvazija Istarska, Teran, Cabernet Sauvignon, Pinot Crni (Noir), Merlot and a small amount of Cabernet Franc.  The Cabernet Franc production is blended in approximately equal amounts with part of the production of the other three red wines to produce a cuvée names Bocca Rossa (red lips or mouth) – the 2011 vintage won a silver medal at Vinistra 2014. This wine is a quintessential example of a beautiful Istrian fine red wine, delightful fruit nose, medium bodied and presenting an extraordinary rippling taste sensation of different fruits being introduced across the tongue when in the mouth – no wonder it is called red lips! The tannins are pleasant, as the wine was matured in 500 litre barrels for 12 months, and this contributes to a very authentic mouth feel that confirms the wine is a natural handcrafted artisan product.

The Malvazija Istarska 2013 was different to many of the Malvazija’s of the same vintage from other producers as it had a lower acidity, but was still very floral and medium bodied for a silky mouth feel and beautiful Malvazija fruit signature – wonderfully easy drinking.

The Rossi family history of wine production dates back to 1885 when Josip’s great grandfather travelled from Udine in Italy to Istria. The estate was then divided about twenty years ago between Josip and his brother Marino, who has a wine label with the same surname Rossi.

Josip is supported in the wine production by one of his two daughters, Sara who has two years left to complete here degree in Oenology. Sara is already bring ideas from her course into the wine making and shared with me and Mark Roberts that their vision is to expand wine production by buying more land in a few years.

Sadly, at the moment, Pino Rossi do not export their wines, but maybe they can be persuaded to release a small parcel for us Brits so that we enjoy the pleasure of their wines back home. We will see…

If you would like to register your interest in Pino Rossi wines, should we be able to import them into the UK, please email mark@croatianfinewines.com