The pre-emptive strike by the Slovenia government, which started as early as 2009, on Croatian and Italian wine producers, by registering the wine ‘Teran’ name as being a Protected Designation of Origin for the Kras region of Slovenia, is astonishing in its brazenness and absurdity: 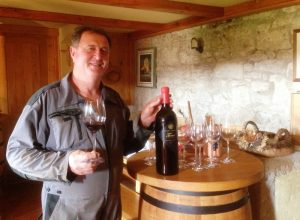 “The European Commission said on Monday that Croatian producers cannot sell wine under the name of Teran, which is recognised as originating in Slovenia’s Kras under protected designation of origin. After Croatia joins the EU in July, the sale of Teran-labelled wine from the country will also not be allowed in Croatia.

Croatia did not object when Slovenia registered Teran for protected designation of origin, Roger Waite, the press officer of Agriculture Commissioner Dacian Ciolos told the STA on Monday.

In line with EU regulation, Teran is a protected Slovenian product and as of 1 July no Croatian wine can be sent to the market under this name, added Waite.

The statement comes after Slovenian authorities found Croatian wine labelled Teran being sold in stores around the country and ordered that the contentious wine be removed from the store shelves last week.” (23 April 2013) http://www.serbia-times.com/slovenia-won-wine-dispute-with-croatia/

Teran from Slovenia in wine reference books is always identified as being from the Refosk grape. Teran from Istria Croatia and Northern Italy is known and identified as Teran, an indigenous grape confirmed by DNA analysis. So for Slovenia to claim brand and regional protection of the word Teran is absurd as Slovenian Teran is not even made from Teran, but another grape, Refosk.

Oliver Arman of Franc Arman www.francarman.hr, one of Istria’s top Teran producers, famous for his Teran and Teran Barrique, has taken steps to fight against this EU legislation and protectionism by registering the words “Teran is Istrian” “Teran je Istriajan”®as a trade mark. He has also been lobbying hard through the broadcast media to create awareness of this outrageous stealth attack on Croatian and Italian wine producers.