It was with great sadness that we at Croatian Fine Wines heard of the passing away of Tony Hodges, Chairman of Brand Story (UK) on the evening of Monday 10 February 2014. 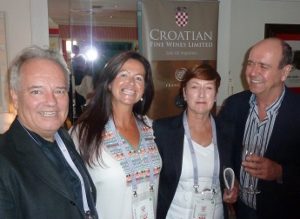 I had the pleasure of being introduced to Tony Hodges through a mutual friend Charlotte Callaghan and spoke to him several times on the telephone before finally meeting him at Croatia House, for the Vina Croatia Olympics 2012 wine tasting event in August. Oz Clarke also joined in the tasting of Croatian wines from the four regions and the Croatian rowing team also celebrated an Olympic medal on the same day and joined in.

More recently I met Tony again by chance at the Zagreb Gourmet Food and Wine fair in April 2013 where he was happy for me to record him defending the Croatian wine Teran from Istria, in what became know as the #TeranDispute with Slovenia. You can see his energy passion and communications skill in action. He mentioned to Sharon Waddell that he had met a Croatian woman and was planning to marry, which he did later that year.

Later in the same year I was called by Tony and discussed Croatian wine and he said that he had cancer in passing conversation. I was shocked, but Tony brushed it off by saying “Do I sound ill?” “No”, I replied and so we moved on with an energetic conversation.

I have been given permission to include a few quotes from others on Tony Hodges.

“We all were devastated to hear that our dear friend Tony Hodges died on the same evening when we closed doors of our “En Premieur Tasting” that we have organized the first time together – Istria, Slavonia & Croatian Danube and Dalmatia as wine regions – following the national strategy that was very much led and created by him.

‘Tony was a man of extraordinary vision and exceptional kindness and he will be very deeply missed while being very deeply remembered’, says Steven Spurrier in deep sorrow.

We all agree. Tony will for ever stay a person who not only wrote and created a new chapter – book – ERA – in the Croatian wine story.  He made thinks more understandable – easier, taught us to see things differently; he was very passionate about his engagement with Vina Croatia project and soon became a very dear friend.
We shall continue to follow his visions.”

Tony definitely was one of those people who make an impact, in the positive sense, when you meet them.  Interesting, warm and full of energy; a legend –just like the brand story of Croatian wine.